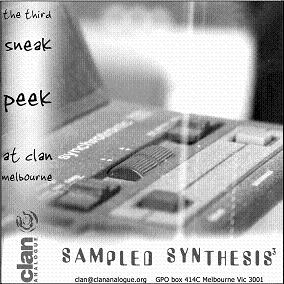 Originally released in 2002 In the aftermath of the Clan Analogue compilation Solid Gold, Clan Analogue Melbourne's new limited edition sampler CD Sampled Synthesis volume 3 continues to whet the appetite of the groove deprived listener.
For volume 3, Clan Analogue have put together a selection of recent recordings perfect for those Summer afternoons spent drinking gin'n'tonics whilst hanging out in one of those new trendy bars around town.
-1.Dropkick the Pimp by Kaputnik + One man, his gramophone, a sampler and his single-malt take on the world. -2.Same Diff by Columryme + The vibe on the streets, coming to you straight from South Melbourne. -3.City Break by city frequencies + The sounds of the Melbourne CBD adapted and remixed into a collage of beats, ambience and craquelure. -4.Tranzytzya by Klej Butapren + Mr minimal presents a phonic menage a trois of glitch, beat and melody. -5.Gargamel by Bubble’n’Squeak + Melbourne’s new electro wunderkinds perpetuate another slice of sonic mischief and auditory phenomena. -6.Ether by Zog + An elegy for those legendary Sunday nights at Alia Bar. -7.Seedy Films by Toupee vs Other People’s Children + Soft Cell’s classic is given a makeover using looped beats and casio chords with abandon. -8.Transient Drift by Continuum + Electronic’n’western as theorised, extrapolated, refined and amalgamated into rhythmic and tonal quanta by n-Entropy and g-Quantum. -9.Sombre by Clowns Smiling Backwards + A new abstract groove from the masters of psychedelic dub themselves. 10.Tidal Groove by Angelpuss vs Windup Toys + When the going gets weird, the weird turn pro. 11.Floating Funk by Zog + More minimal techno from the Detroit wannabe. 12.Home Made Analogue Jam by Evan on Earth + Back from his German sabbatical, Evan seeks to reclaim his mantle. 13.Elapsed Time by Old Des Peres + Kynan Robinson explore the notes between the notes with some processed trombone and electronica.
see also Sampled Synthesis 01, Sampled Synthesis 02, Sampled Synthesis 04,Sampled Synthesis 05,Sampled Synthesis 06
http://clananalogue.com